In the illustration below: 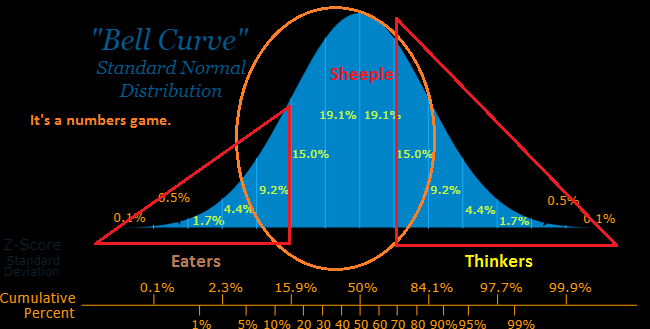 The problem becomes rather clear - it's a numbers game.

No matter how well you might understand a situation, or have it deciphered, you will not be able to explain it, let alone hold the attention of a significant number of Sheeple long enough in order to convince them, and effect a change of any permanence.

Fully 54% of the population mass fall within a gradient that is neither capable of figuring things out on their own, or even possessed of the desire to do so. That they, as a group, continue to wear their gifted nose ring is a source of constant amazement to me, yet highlights their lack of awareness and informed conviction about anything whatsoever, outside of a "rage at the Man". They can be counted on to consistently react out of base instinct whenever needed, as a herd, to any stimulus provided by the well monied agendas being put forth.

That nothing is being done about those agendas, or the organisations orchestrating them, tells another story on its own.

At the right are the 15% who might be swayed one way or the other, given time and genuine curiosity, yet this is counteracted with the base desire to be part of the larger herd. The further to the left you go, the stronger effect this influence exerts.

At the lower end is a similar band who might be swayed into action, rather than say, inaction, but not of any real use but to act as support for a social safety net and the like, perpetuating that hand in your pocket. As time has passed, this portion, I suspect, has grown larger in scale than depicted, through various initiatives (vaccines, addictive pharmaceuticals, proliferation of illicit drugs) which benefit from the revenue streams their existence demands.

Coming to terms with this dynamic is, IMO, paramount to any sense of tranquillity in this world. You just can't fix stupid, especially when they are doing their best to breed it as an army against you, and if you aren't prepared to try to lever stupid yourself, as useful idiots to your cause, then you had better understand that you must be prepared to defend yourself against it, or at least try to stay out of sight in order to carry on as you see fit.

In the past I have kept this to myself as it's easy to see how arrogant a statement like this sounds, but given the days events, and the ease as which the herd has been swayed to a new outrage as opposed to the one JUST PASSED, the knowledge of this is where I find peace, and so I write.

There are enough people capable of understanding to surround myself with, as I have been seeking them out for years in my personal life. Still, when confronted with the sheer amount of gullibility out there relative to whom I spend my daily time with, it isl a shock to see in action.
Top
Post Reply
1 post • Page 1 of 1

Users browsing this forum: No registered users and 1 guest